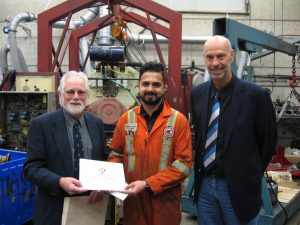 Captains Stan Bowles (left) and Joachim Ruether (right) present Engine Cadet Jashanreet (“Josh”) Singh Bains with the NPESC Bursary for 2016. Josh is a Second Year Cadet in the Marine Engineering Program at the Marine Campus of BCIT.  His most recent sea phase of the program has been on an Algoma Chemical/Oil tanker, the M/T Algosea. 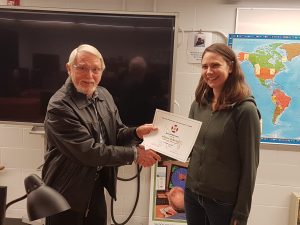 Congratulations to the successful applicants for our 2016 bursary awards.

Our awards committee had a very tough task this year in choosing the winners from an outstanding group of applicants. From the total of 19 applicants the following 5 winners were chosen:

Thank you to all that applied.

It was with great pleasure that Richard Smith attended at the Marine Campus of BCIT in North Vancouver, as a director of the BC Branch of The Nautical Institute, on June 16th to make a presentation to 3rd year Deck Cadet Jeremy Botel. 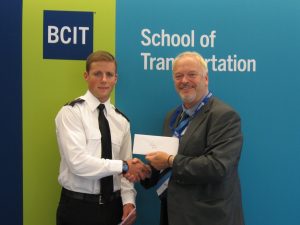 Jeremy is one of three recipients of Vancouver Transportation Foundation (VTF) Scholarships in 2016.

Our congratulations to Jeremy and thanks to the students and staff at the campus for permitting us the opportunity to make this presentation.

We were pleased to be able to present a copy of The Marine Firefighting manual to Rene Tomljenovic (centre), a student enrolled in the Watch-keeping Mate program at WMI. On hand to make the presentation from NPESC was Captain Joachim Reuther (right) along with WMI President, Captain Bob Kitching (left). 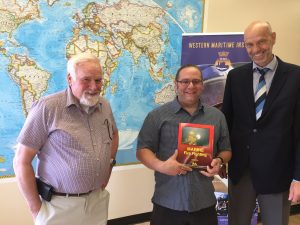 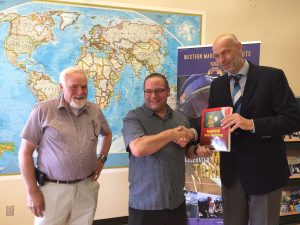 BCIT Marine Engineering Cadet Andrew Lehman was the recipient of the First Year Achievement bursary for 2015 and was presented with his award at a ceremony held at the North Vancouver Marine Campus of BCIT on Monday afternoon.

An endowment was established in 1999 with matching funds from the Government of British Columbia.  The annual interest is awarded to a student in the Marine Engineering or Nautical Sciences programs of BCIT.

The program instructors at the Marine Campus select the recipient of this award based upon the student’s performance after the first year of the course.

The endowment with the BCIT Foundation generates insufficient income at this time to provide an award worth $1,000.  So, the Society issues its own cheque to cover the balance.