2nd year BCIT Engineering Cadet Karn Chema has just returned from sea time with Algoma and was able to collect his certificate for being one of our successful Fall bursary recipients. Presenting the award to Karn is NPESC secretary/treasurer Captain Joachim Ruether. The presentation was made at the Sailors’ Point memorial adjacent to the BCIT Marine Campus in North Vancouver.

Capt. Joachim Ruether presented one of our Fall bursary awards to BCIT Marine Campus Nautical Sciences Cadet Ashley Obeck. This particular award is made possible through funds derived from our Vancouver Foundation Fund and those supplied by Capt. Harry Allen of the Vancouver Division of the Company of Master Mariners of Canada. Our congratulations go out to Ashley and we wish her the very best in her future efforts and endeavours.

At noon today we were thrilled to present 5 successful applicants for our bursary awards with their certificates for 2019.

It was a great pleasure to have one of our major benefactors, Captain Harry Allen, in attendance to make the presentation to Cadet Justin Lamarche. The bursary awarded to Justin was made possible by a generous donation made by Captain Allen.

Also in attendance at this presentation ceremony was Captain Barbara Howe who, in her capacity as a member of the Vancouver division of Master Mariners of Canada, presented a certificate to Cadet Dylan Shaver as the successful recipient of their Baugh Fund Scholarship. During her presentation, Captain Howe reminisced about receiving this self same award early on in her career and the ways in which it helped her.

As the chair of the International Sailors’ Society of Canada (ISSC) Bursary Committee, Captain Smith also took the opportunity to present their 2019 Maritime Bursary Award certificate to Ahmed Beltmer.

Captain David Whittaker was in attendance and also wearing two hats. Both as a founding member of the NPESC and single handedly responsible for publication of the NPESC publication “SEATIMES” as well as a member of the BC Branch of the Nautical Institute. It was in this capacity that he presented the 2019 NIBC/VTF (Nautical Institute BC Branch/Vancouver Transportation Foundation) bursary award certificate to Cadet Robert Jamieson.

We were very pleased to make a book award to Ms. Robin Haynes at Camosun College earlier this week. Robin is a student in the 150 Ton Master program and aspired to work in the coastal tourism industry as a skipper of a natural history cruise vessel. The book awarded to Robin was “Golden Stripes” in which Captain V.S. Parani combines the credibility of his seafaring experience with his talent as a master storyteller to reveal the leadership challenges at sea and his strategies for staying on course.

Once again we were pleased to attend at the BCIT Marine Campus Convocation ceremonies for their cadet program and make book presentations to cadets who had made outstanding efforts and achieved good grades. 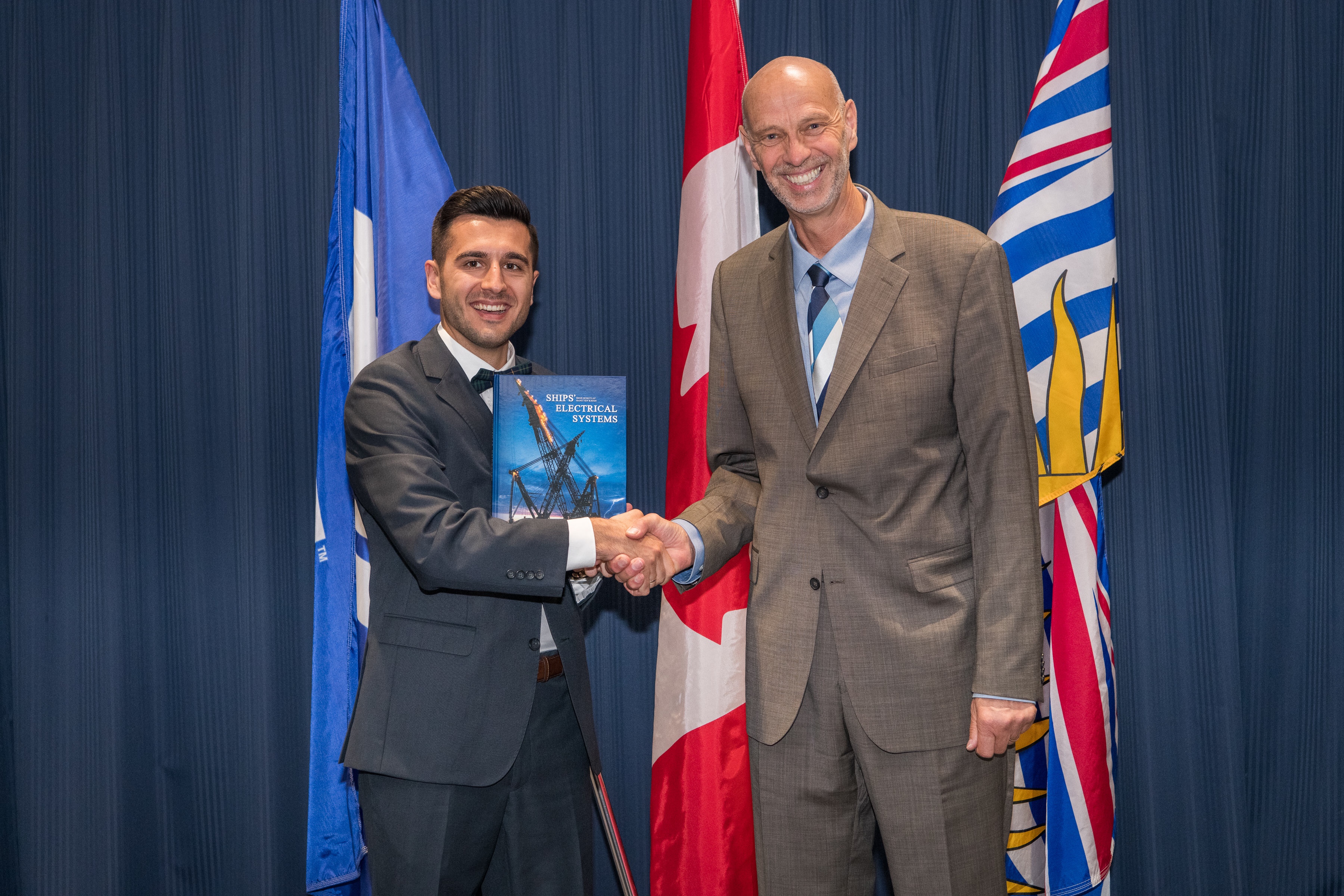 In the above photograph, Captain Achim Ruether presents Engineering Cadet Peter Didak with his book award. 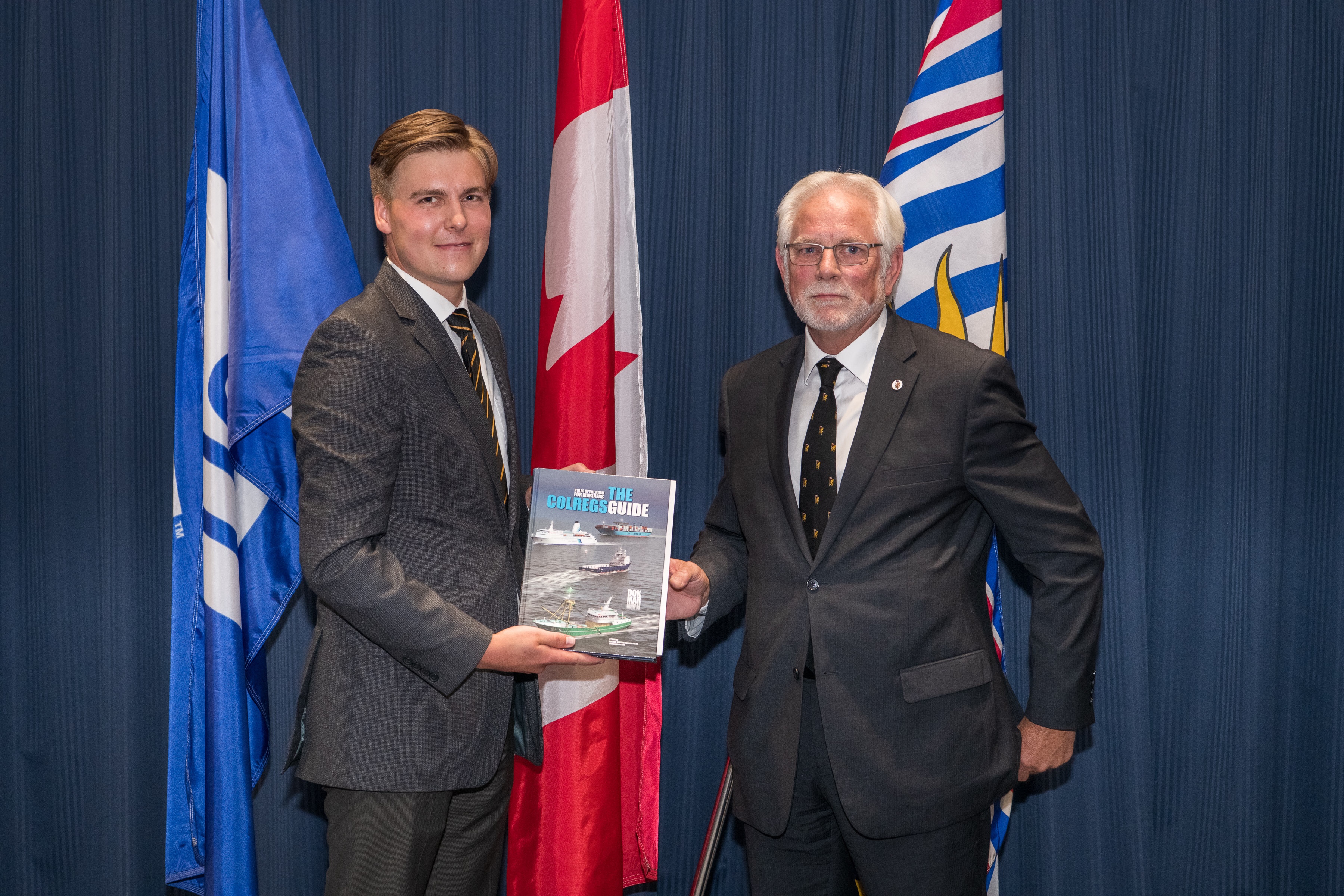 In the above photograph Captain Stan Bowles presents Deck Cadet Stephen Wyatt with his book award.

On Thursday June 20th Captains Joachim Ruether and Richard Smith were guests at the CIMarE awards ceremony at the BCIT Marine Campus where we took the opportunity to award first year engineering Cadet, Reece Maddison (2018) with the BCIT Foundation First Year Achievement award bursary, which is comprised of two cheques. One from the BCIT Foundation and a top-up cheque from the NPESC. 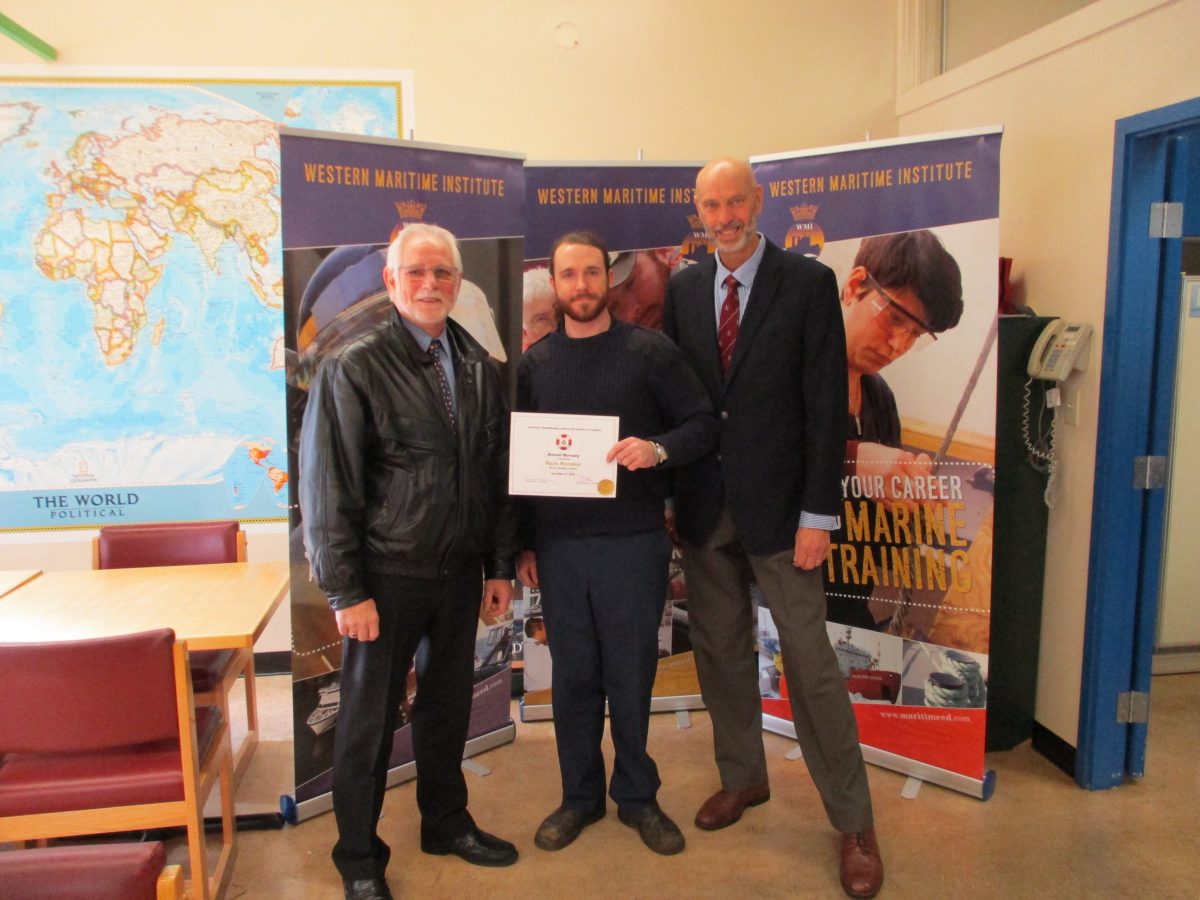 On Friday January 25th Captain Stan Bowles and Captain Joachim Ruether attended at Western Maritime Institute in Ladysmith on Vancouver Island and were pleased to be able to present a bursary award to Ryan Karakai and book awards to Aaron Farr and Cody Sutherland.

Captains Bowles and Ruether also took the opportunity to speak to the assembled students and instructors and encouraged them all to keep an eye out for next year’s bursary award notifications and advertisements. 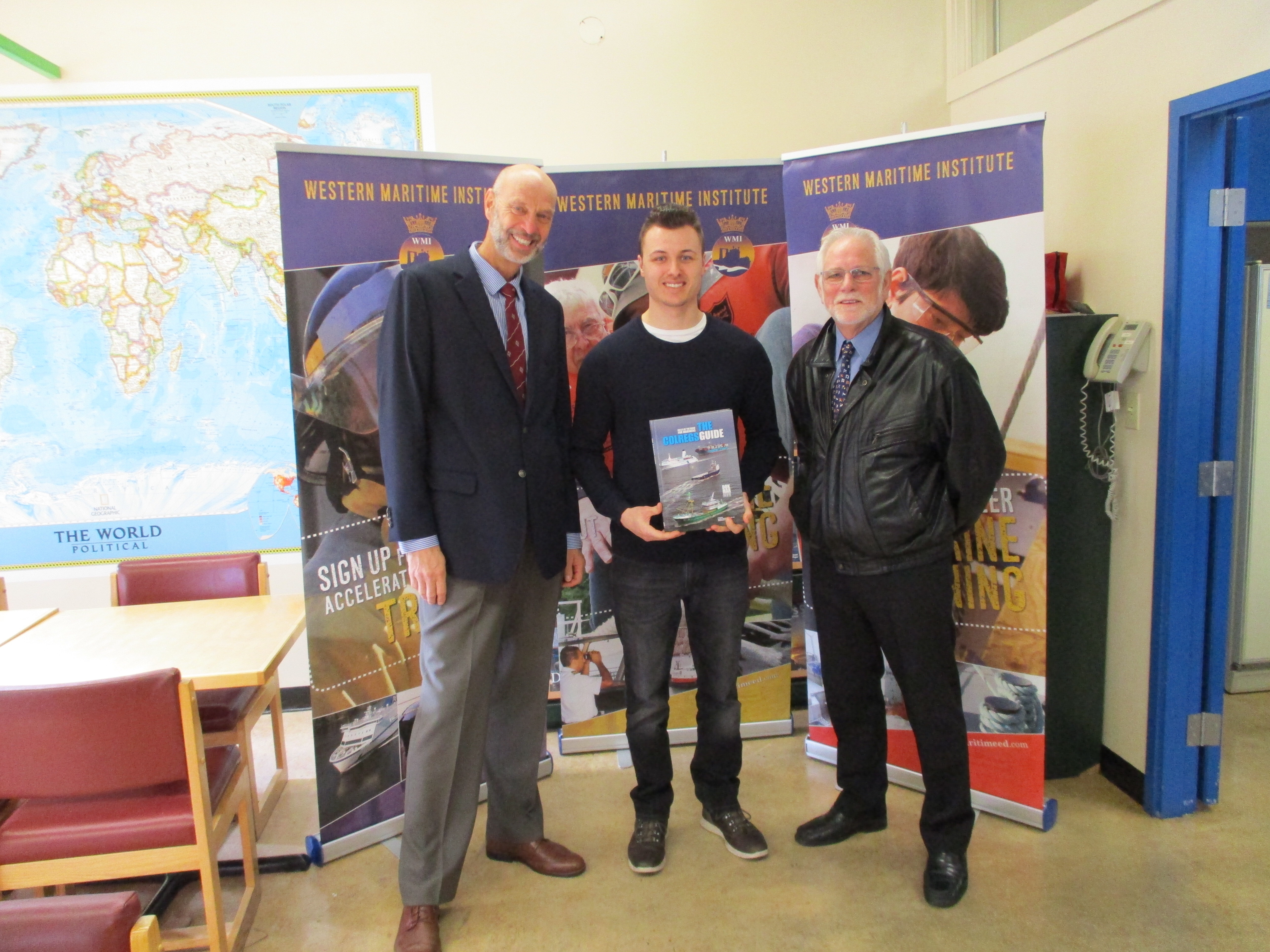 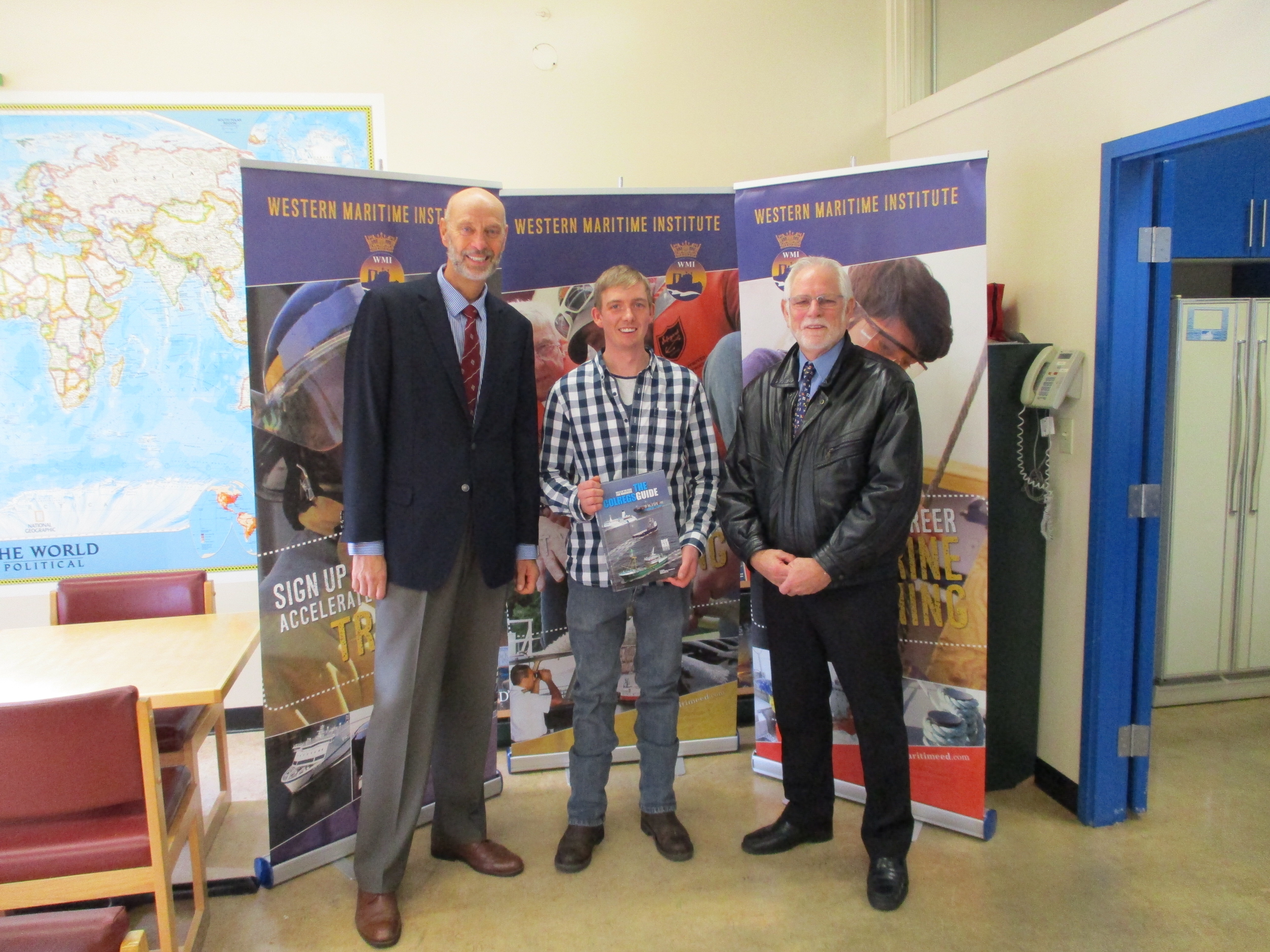 Captain Joachim Ruether was in hand at WMI in Ladysmith to present students Nicolas Cote and Ryan Winger.

Ryan was a winner of one of this year’s NPESC/Supercargoes Bursary awards. He is working on his 150 ton ticket and plans to work on a 500 ton ticket at s later date. 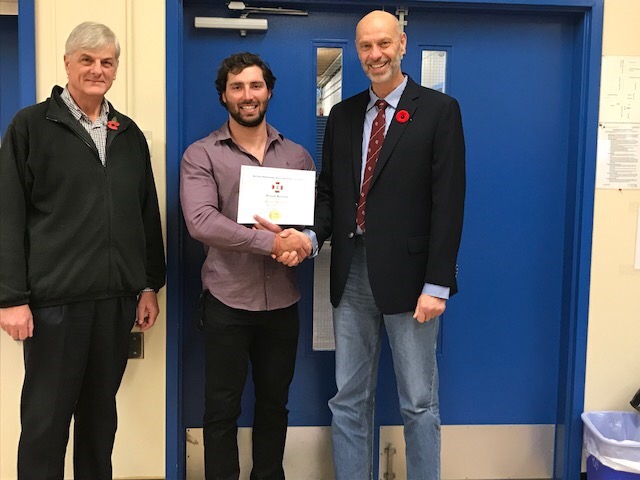 Nicolas was the successful recipient of an NPESC Book Award and has been successful in his Master 150ton /Watchkeeping Mate studies. 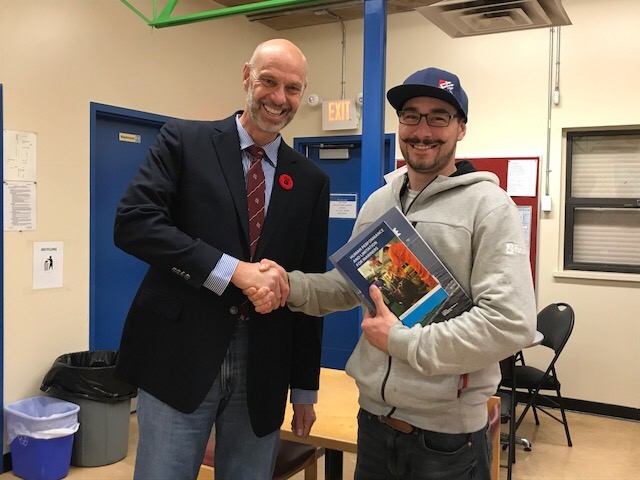 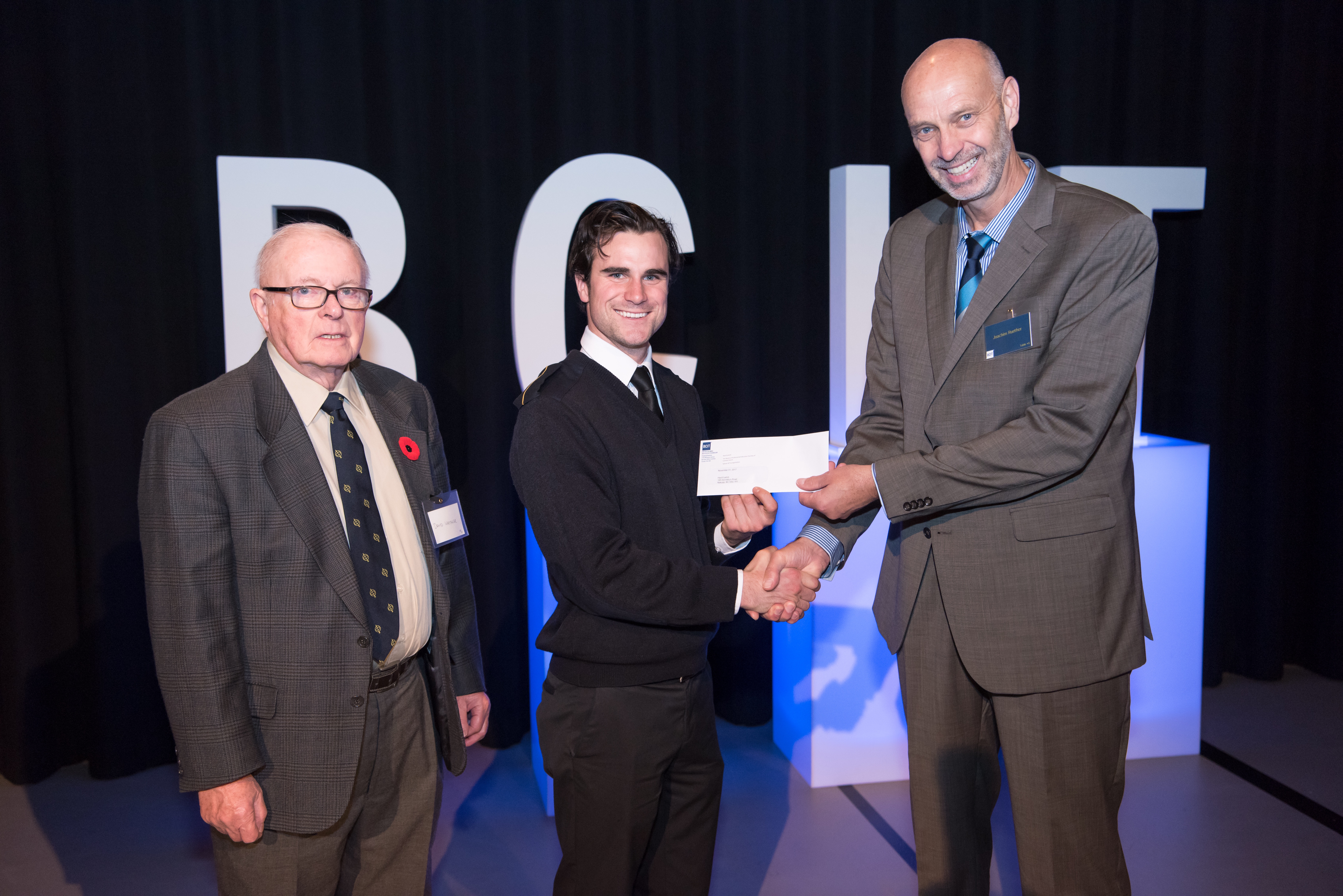 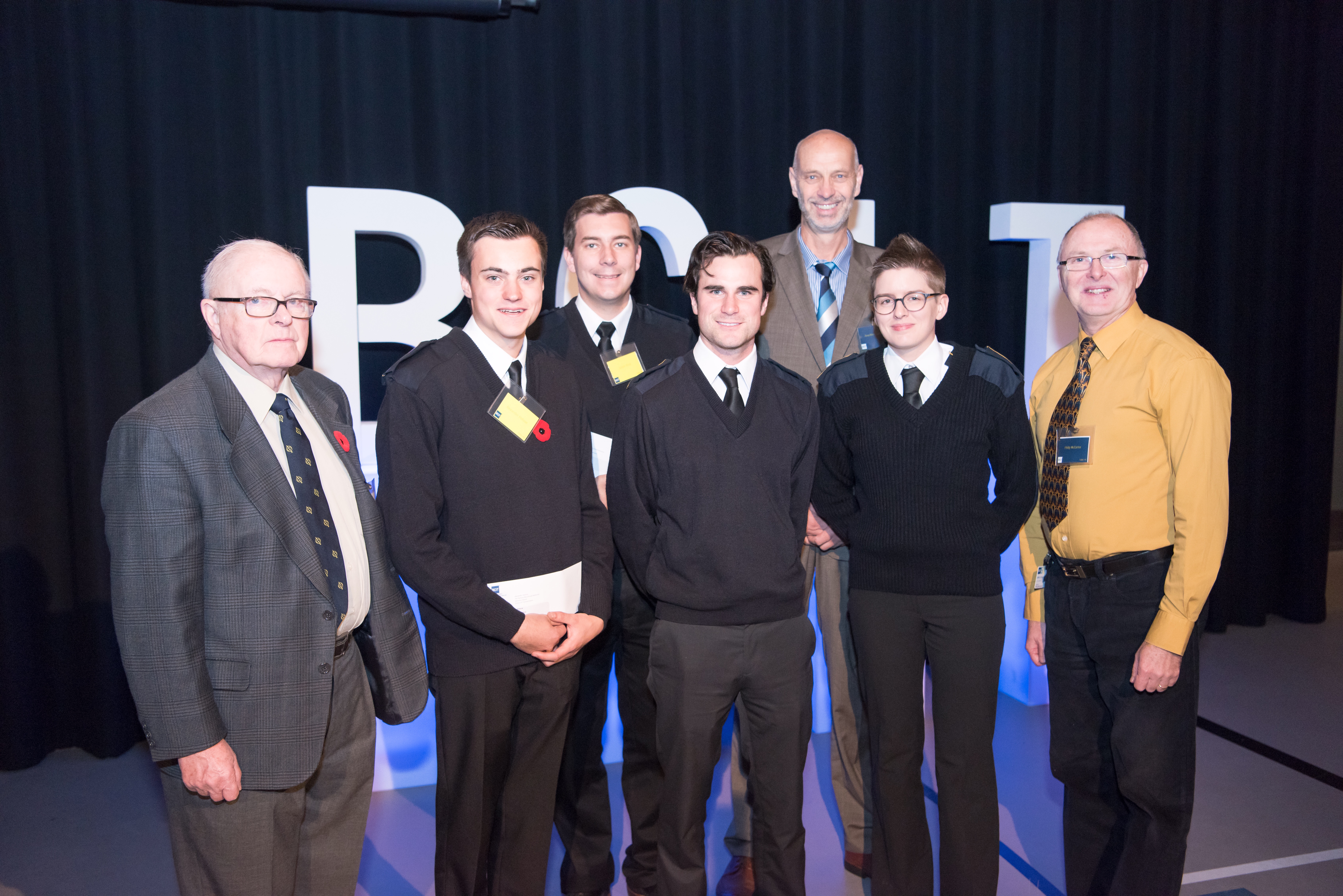 The International Sailors Society is now accepting applications for its Maritime Bursary created in honour of its long-serving director and corporate secretary, Sue Hanby.  The bursary is open to students who are enrolling in marine related studies with a recognized educational institution, however, please note that preference will be given to students who are preparing for a sea-going career.  For more information, visit: www.sailorssociety.ca.